Harlem shuffle : a novel
Whitehead, Colson
""Ray Carney was only slightly bent when it came to being crooked..." To his customers and neighbors on 125th street, Carney is an upstanding salesman of reasonably-priced furniture, making a life for himself and his family. He and his wife Elizabeth are expecting their second child, and if her parents on Striver's Row don't approve of him or their cramped apartment across from the subway tracks, it's still home. Few people know he descends from a line of uptown hoods and crooks, and that his façade of normalcy has more than a few cracks in it. Cracks that are getting bigger and bigger all the time. See, cash is tight, especially with all those installment plan sofas, so if his cousin Freddie occasionally drops off the odd ring or necklace at the furniture store, Ray doesn't see the need to ask where it comes from. He knows a discreet jeweler downtown who also doesn't ask questions. Then Freddie falls in with a crew who plan to rob the Hotel Theresa -- the "Waldorf of Harlem" -- and volunteers Ray's services as the fence. The heist doesn't go as planned; they rarely do, after all. Now Ray has to cater to a new clientele, one made up of shady cops on the take, vicious minions of the local crime lord, and numerous other Harlem lowlifes. Thus begins the internal tussle between Ray the striver and Ray the crook. As Ray navigates this double life, he starts to see the truth about who actually pulls the strings in Harlem. Can Ray avoid getting killed, save his cousin, and grab his share of the big score, all while maintaining his reputation as the go-to source for all your quality home furniture needs?"-- 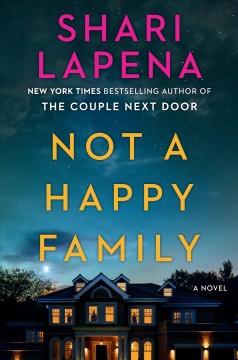 Not a happy family : a novel
Lapeña, Shari
"Brecken Hill in upstate New York is an expensive place to live. You have to be rich to have a house there, and Fred and Sheila Merton certainly are rich. But even all their money can't protect them when a killer comes to call. The Mertons are brutally murdered after a fraught Easter dinner with their three adult kids. Who, of course, are devastated. Or are they? They each stand to inherit millions. They were never a happy family, thanks to their vindictive father and neglectful mother, but perhaps one of the siblings is more disturbed than anyone knew. Did someone snap after that dreadful evening? Or did another person appear later that night with the worst of intentions? That must be what happened. After all, if one of the family were capable of something as gruesome as this, you'd know. Wouldn't you?"-- Provided by publisher. 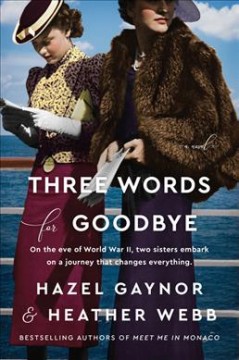 Three words for goodbye : a novel
Gaynor, Hazel
Publisher Annotation: New York, 1937: When estranged sisters Clara and Madeleine Sommers learn their grandmother is dying, they agree to fulfill her last wish: to travel across Europe-together. They are to deliver three letters, in which Violet will say goodbye to those she hasn't seen since traveling to Europe forty years earlier; a journey inspired by famed reporter, Nellie Bly. Clara sees the trip as an inconvenient detour before her wedding, but it's also a chance to embrace her love of art. Madeleine relishes the opportunity to report on the growing threat of Hitler and Mussolini. Constantly at odds with each other as they explore, Clara and Madeleine wonder if they can fulfil Violet's wish, until a shocking truth about their family brings them closer together. But as they reach Vienna to deliver the final letter, old grudges threaten their reconciliation again. As political tensions rise, and Europe feels increasingly volatile, the pair are glad to head home on the Hindenburg, where fate will play its hand in the final stage of their journey. (Original), 400pp. 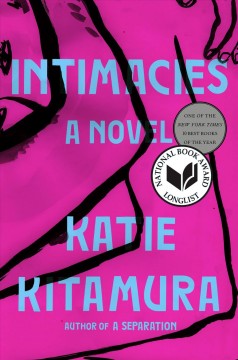 Intimacies : a novel
Kitamura, Katie M.
"A novel from the author of A Separation, a taut and electrifying story about a woman caught between many truths. An interpreter has come to The Hague to escape New York and work at the International Court. A woman of many languages and identities, she is looking for a place to finally call home. She's drawn into simmering personal dramas: her lover, Adriaan, is separated from his wife but still entangled in his marriage. Her friend Jana witnesses a seemingly random act of violence, a crime the interpreter becomes increasingly obsessed with as she befriends the victim's sister. And she's pulled into explosive political fires: her work interpreting for a former president accused of war crimes becomes precarious as their relationship is unbound by shifting language and meaning. This woman is the voice in the ear of many, but what command does that give her, and how vulnerable does that leave her? Her coolly impassioned views on power, love, and violence, are tested, both in her personal intimacies and in her role at the Court. She is soon pushed to the precipice, where betrayal and heartbreak threaten to overwhelm her; it is her drive towards truth, and love, that throws into stark relief what she wants from her life."-- Provided by publisher. 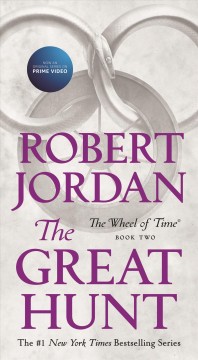 The great hunt
Jordan, Robert
The Wheel of Time turns and Ages come and pass. What was, what will be, and what is, may yet fall under the Shadow. For centuries, gleemen have told of The Great Hunt of the Horn. Now the Horn itself is found: the Horn of Valere long thought only legend, the Horn which will raise the dead heroes of the ages. 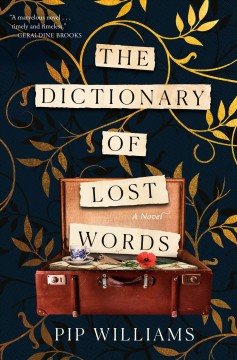 The dictionary of lost words : a novel
Williams, Pip
"Esme is born into a world of words. Motherless and irrepressibly curious, she spends her childhood in the Scriptorium, a garden shed in Oxford where her father and a team of dedicated lexicographers are collecting words for the very first Oxford English Dictionary. Young Esme's place is beneath the sorting table, unseen and unheard. One day a slip of paper containing the word bondmaid flutters beneath the table. She rescues the slip, and when she learns that the word means "slave girl," she begins to collect other words that have been discarded or neglected by the dictionary men. As she grows up, Esme realizes that words and meanings relating to women's and common folks' experiences often go unrecorded. And so she begins in earnest to search out words for her own dictionary: the Dictionary of Lost Words. To do so she must leave the sheltered world of the university and venture out to meet the people whose words will fill those pages."-- Provided by publisher. 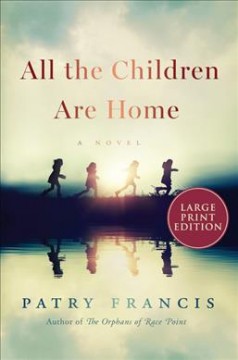 All the children are home : a novel
Francis, Patry
Set in the late 1950s through 1960s in a small town in Massachusetts, 'All the Children Are Home' follows the Moscatelli family - Dahlia and Louie, foster parents, and their long-term foster children Jimmy, Zaidie, and Jon - and the irrevocable changes in their lives when a six-year-old indigenous girl, Agnes, comes to live with them. 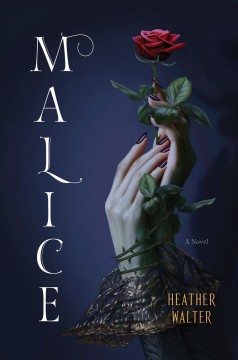 Malice : a novel
Walter, Heather
Once upon a time, there was a wicked fairy who, in an act of vengeance, cursed a line of princesses to die. A curse that could only be broken by true love's kiss. You've heard this before, haven't you? The handsome prince. The happily ever after. Utter nonsense. Let me tell you, no one in Briar actually cares about what happens to its princesses. Not the way they care about their jewels and elaborate parties and charm-granting elixirs. I thought I didn't care, either. Until I met Princess Aurora. The last heir to Briar's throne. Kind. Gracious. The future queen her realm needs. One who isn't bothered that I am Alyce, the Dark Grace, abhorred and feared for the mysterious dark magic that runs in my veins. Humiliated and shamed by the same nobles who pay me to bottle hexes and then brand me a monster. Aurora says I should be proud of my gifts. That she...cares for me. Even though a power like mine was responsible for her curse. But with less than a year until that curse will kill her, any future I might see with Aurora is swiftly disintegrating -- and she can't stand to kiss yet another insipid prince. I want to help her. If my power began her curse, perhaps it's what can lift it. Perhaps together we could forge a new world. Nonsense again. Because we all know how this story ends, don't we? Aurora is the beautiful princess. And I...I am the villain..

For the most up to date information:

Our databases have lots of professional information not necessarily found through the Web.  We also have loads of recommended websites.  Check out our Online Resources page for more information.